THIEF! The Gutsy, True Story of an Ex-Con Artist 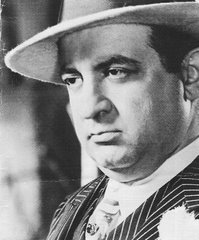 Slick and I were talking the other day about the old Devonshire and Berkshire hotels. (Pictured at right and below.) Back in the 1950s they were headquarters for the Chicago mob. He lived there for a while with his friend, Bob Mauro, who was connected. Slick said, 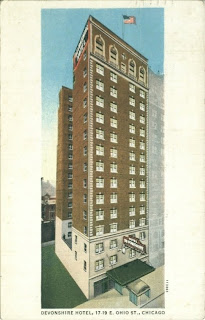 "Everyone has heard of Rush Street, a famous area in downtown Chicago known for its sensational restaurants and nightclubs. But how many have heard of Ohio Street, mob headquarters?"


In our book, THIEF!, Slick describes this colorful neighborhood and it's zany characters:
"These weren't your run-of-the-mill hotels. I guess it took pull to stay there--pretty much by invitation only.

On the first floor of the Devonshire, a coffee shop occupied one side. Across from the coffee shop was a bar loaded with prostitutes. The Berkshire next door resembled the Devonshire except, on the left, it had an Italian restaurant called Valentino's, on the right a bar loaded with prostitutes. A little guy, Davie Fuch, made tough decisions as the doorman at Valentino's. If he didn't know you or you weren't okayed by someone important, you didn't get in, period.

It was Valentino's where the mob-run Rush Street nightclubs like the Chez Paree, Mr. Kelly's and The Living Room quietly dropped off the nights' receipts in brown paper bags to Jimmy "the Monk" Allegretti. The balding, round-shouldered mob soldier ran the place for the Outfit. He had the say about what went on at the two hotels. When Jimmy barked, all the dogs jumped. He left most of the barking to his underlings like Big Joe Arnold, his bodyguard-enforcer-collector. The last table in the narrow, well-lit Valentino's was permanently reserved for Jimmy and Joe to conduct business...

A lot of goofy things went on around the neighborhood. Living there certainly had its perks. Every morning a guy who worked for city hall would systematically collect all the parking tickets on the cars in front of the two hotels and have them fixed. In the summer Handsome Joe, a four-foot-tall ex-fighter with his nose plastered all over his face, drove a carload of strippers out to Calumet City to turn some tricks. It was sort of a "shopping center" for hookers."

Slick went on to say,
"You knew that, if the front door to Valentino's was busted, some guy tried to get in who wasn't cleared by Davie the doorman and was thrown out. The restaurant had pictures of movie stars on each wall. The long room had 11 tables--5 on one side and 6 on the other. Me and Bob could tell what "noodles" the chef was cooking by the stains on Jimmy Allegretti's white tie. Jimmy came out of the kitchen with bread dipped in red sauce or white and some of it always landed on his tie. We had a hard time not staring at that tie. Jimmy's table was a who's who of the Chicago Outfit."

Well, all that's gone and the Devonshire's now a cheap joint called the Tokyo Hotel. (Pictured below.) Wonder what Tony Montana would say?

[The above excerpt is taken from THIEF! The Gutsy, True Story of an Ex-Con Artist. All rights are reserved by the authors.]

Posted by mobwriter at 3:56 PM

I lived in the Penthouse of the Tokyo Hotel from 1985-1987. While the rest of the hotel was a cheap joint, the Penthouse was incredible.

My aunt lived in and worked for the Berkshire Hotel for over 20 years from the 50's through the early 70's. I have many fond memories of the hotel and the 'characters' who frequented this hotel. I personally knew Jimmy Allegretti and he was basically a nice guy. As a kid, he was always nice to me and as I was growing up he always was there with a ready smile. When I got older and realized that he worked for the 'mob', it really didn't bother me as he was still the same person I had known for years.

Funny you should say that about Allegretti. I first heard about him when my brother worked as a bartender at the Living Room in the Loop. He thought Allegretti was a great guy too. It was many years later that I met Slick Hanner who had a different take on Jimmy "The Monk" Allegretti.

Thanks for the input.

Big Joe Arnold had a partener, "little Joe" with a middle name of Nick. I know because he was my father.

After Allegrtti went to the Federal Pen Joe Arnold opened the Shirts Unlimited store on State street north of Chicago Ave. There was a huge German Shepard dog in the place and any body dumb enough to try to open the door would get the dogs attention.
Jimmy Allegretti died on the plane back to Chicago when he was released. The Coming home party planed for him at Whitey's Night Life Show Lounge turned into a wake.

This iѕ really interesting, You're a very skilled blogger. I have joined your feed and look forward to seeking more of your magnificent post. Also, I have shared your site in my social networks!

Feel free to visit my weblog kitchen and bathroom design

Hello it's me, I am also visiting this web page regularly, this web page is actually pleasant and the people are
in fact sharing nice thoughts.

I'm not sure why but this weblog is loading incredibly slow for
me. Is anyone else having this issue or is it a problem on my end?
I'll check back later on and see if the problem still exists.

Thanks for sharing your thoughts on lita ford. 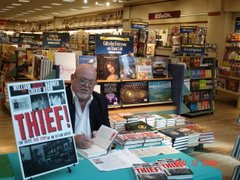 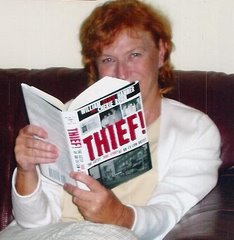 mobwriter
My friend William "Slick" Hanner and I wrote his life story THIEF! which was published Oct. 2006, by Barricade Books. Taking part in our constant go-a-rounds over THIEF! was Slick's dog, Herman the German Schnauzer. So endearing was Herman with his woofs of approval or growls of disapproval, that he became the subject of another story I wrote called Dog Justice, a gritty urban detective story for young readers.